Sainfoin was once such a familiar crop in the Cotswolds that one acre in every seven carried the crop. The name Sainfoin comes from the French saint foin meaning healthy hay and has become nick-named “Holy Hay”.

In the days when working horses were common, Sainfoin was a major hay crop. Sainfoin provides a superb forage for grazing animals and voluntary intake of sainfoin by cattle and sheep is 20% higher than for grass.  Unlike many other legumes, it is non-bloating and is known to have anthelmintic properties, so reducing the problems associated with livestock worms.  Sainfoin contains condensed tannins, and it is these that help protect animals against bloat.

Sainfoin has also been shown to increase protein absorption. This, combined with its other health benefits, means animals grazing Sainfoin have very rapid liveweight gains, so young stock can be finished sooner and with very good carcass grades. Sainfoin is extremely useful to low input and organic farmers.

Sainfoin, which flowers from June until September, is great for the environment too. There is lots about Sainfoin on the web – do Google it if you have concerns or want to know more. You will find more information here https://www.soilassociation.org/farmers-growers/farming-news/2018/june/08/why-sainfoin-is-known-as-holy-hay/

TRY IT YOURSELF – free sample

We would love more people to try Sainfoin. Although we primarily grow the hay for our own livestock we do have several hundred bales set aside for sale. We are really keen to have others try a bale or two – and we will give you a couple for free if you can collect. Or if you are close to Stow-on-the-Wold we will drop some off. If you are pleased once you have tried the free sample you might be interested in purchasing some bales. The price is £3.75 per bale collected from the farm. Delivery by negotiation.

This year we have cropped 6 acres and next year there will be more. An ancient crop, making a come-back. And grown right here in the heart of the Cotswolds.

We have had the hay lab-tested for minerals content – email us for a copy of the results.

WHY WE ARE GROWING SAINFOIN

Like most livestock farmers we want to keep our prize-winning pedigree sheep in top condition by controlling worms and other parasites in their gut. Until now the only way to do this has been by using approved chemical drenches, but these are not just expensive – (British farmers spend £80 million a year on wormers) – there is evidence that the parasites are becoming immune to the chemicals.

Four years ago we heard of research at Oxford University into plants which contain chemicals which are natural wormers. The most effective was the long-lost Victorian crop, Sainfoin. So we decided to bring Sainfoin back to the Cotswolds fields where its purply-pink flowers were once a common sight.

Sainfoin is a bit of a miracle crop. In addition to the benefits for our livestock, there are significant environmental gains because Sainfoin:-

· Is grown without fertiliser or sprays.

· Does best on poorer soil, like the Cotswolds “brash” on which our own farm sits.

· Actually puts nitrogen back into the soil.

· Is great for bees and other insects.

Our Sainfoin was sown in 2018. It will produces 2 hay crops every year.

In addition we harvest the crop using old-fashioned, light-weight farm machinery, some of which we have had specially restored. We don’t do this because we are sentimental – it is because modern, high-speed machinery bashes hay about so much that a lot of the tasty leaves and dried flower heads are lost in the process. So our antique machinery preserves the goodness of the Sainfoin hay. 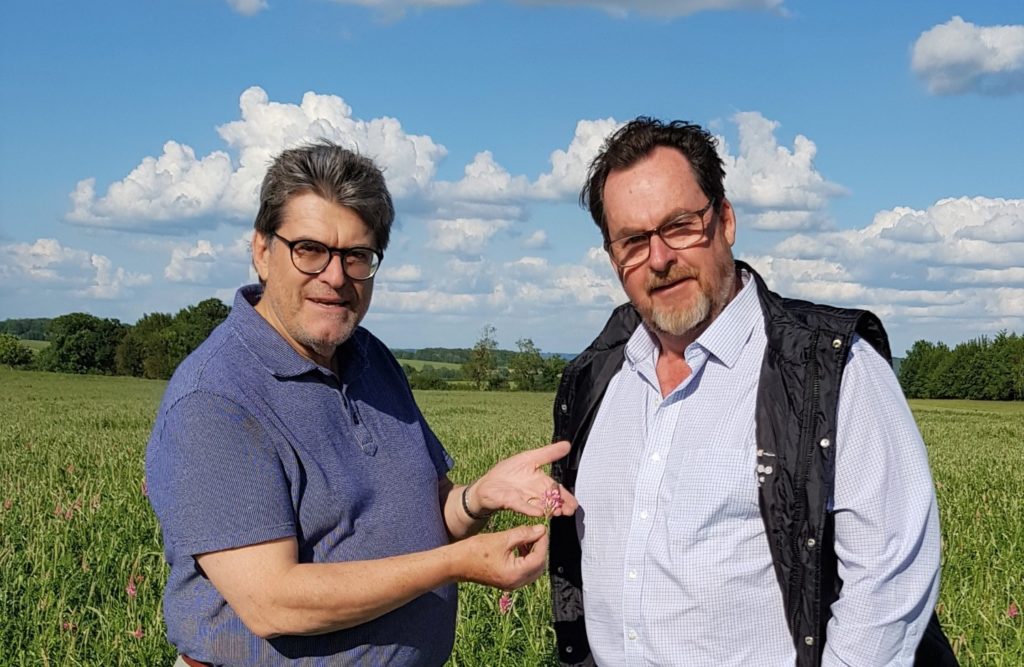